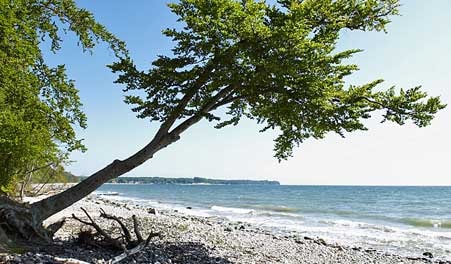 The forest arround the mannor of Corselitze

The forest stretches over a range of 16 km on the east coast of the island and is for this reason the biggest one on Falster.

The name Corselitze adverts to the mannor of Corselitze which was constructed in 1766 under the rule of General Classen and belongs today to the beneficial organisation named Det Classenske Fideicommis.

The forest consists of grassland and moor and some kind of plants like five kinds of orchidaceous, as well as the very rare Bird's-nest Orchid, which as the name says, also belongs to the orchidaceous. Sometimes you can even find the northern giant horsetail and in springtime the white, as well as the rare yellow and blue anemone.

But there are also animals living in the forest, like the ermine, least weasel and mustelidaes - all belonging to the family of weasels - as well as roe deers and fallow deers.

The different trails are marked in the forests.
A brochure can be found in the tourism information of the region or be downloaded here as pdf-file (only available in danish).

Address of the mannor Corselitze: Tromnæs Alléen 2 - 4800 Nykøbing F.
Be aware that you can only visit the park, the building is closed to the public.