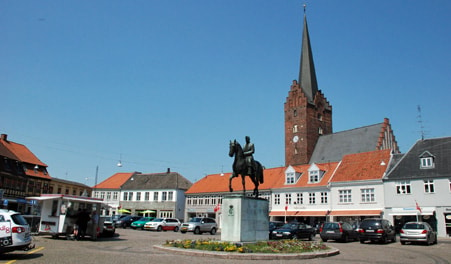 Around the town of Nakskov
Nakskov with its population of almost 13,000 inhabitants is the largest town on Lolland and has held the status of market town since the 13th century. Through the centuries, the town has been an active commercial town with charming, old high streets and well-preserved buildings that contain a number of speciality shops with excellent opportunities for shopping and an exciting selection of restaurants, cafes and bars.

On several occasions, Nakskov has played a significant role in Danish history. For example, during the Dano-Swedish Wars from 1658 to 1659, when Nakskov had to suffer the indignity of occupation by invading Swedish forces who crossed the Langeland Strait on the ice. A number of violent battles ensued, during which Saint Nicolai Church received a direct hit from a cannonball.

Throughout the 19th century Nakskov developed through its heavy industry and was renowned for amongst others its sugar factory and for having the country's leading shipyard which was constructed in 1916. The shipyard closed in 1987 but a number of innovative renewable and alternative energy companies have since replaced it.

Nakskov's role through history can be explored in depth at a number of different museums that include the working museums Den Gamle Smedje (The Old Smithy) in Tilegade and Det Gamle Trykkeri (The old printing Works) in Jernbanegade. Nakskov Tourist Bureau offers guided tours of the town.