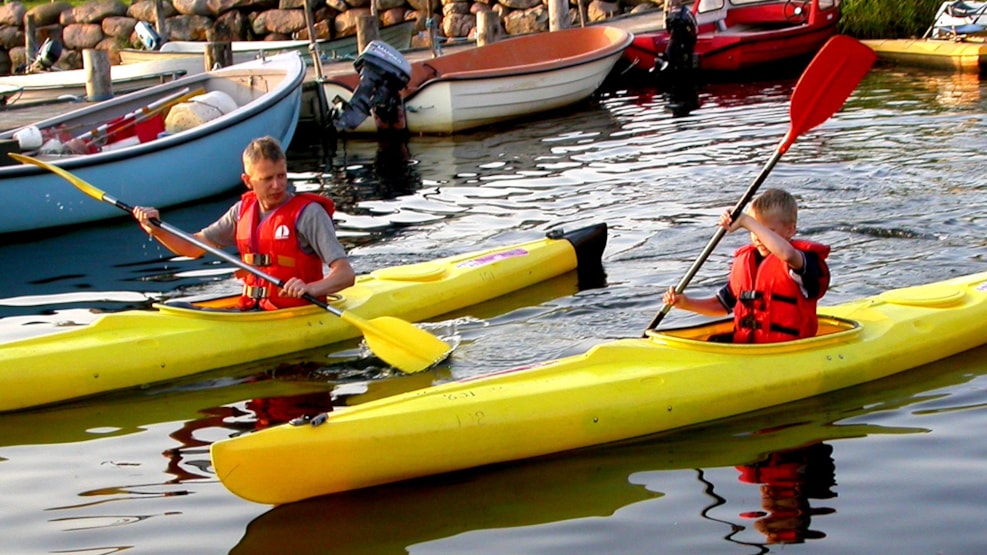 Guldborgsund Kayak Club, Dæmningen 2a, 4800 Nykøbing F with optimal parking facilities and launching from the club’s jetty. The clubhouse is locked, but if there are members present there is access to toilet and in the nearby Toreby Sailing Club access to toilet is also possible. There are shopping opportunities close to the Kayak Club (Føtex).

Around Flatø, Kalvø, Kejlsø and Lilleø there are large areas with shallow and stone filled waters. On the stretch between Flatø and Lolland, it is important to keep well

clear of Lolland - (most significantly is the white stone called ”The White Bitch”). However, do not go too close to Flatø either, since here it is also very rocky. It is possible to go into Flintinge Å (stream) and Frejlev Å (stream), but again you have to be careful as there are quite a few large stones in the mouths of the streams.

Flintinge Å: Access is allowed only at the bird’s tower. By the islands of Flatø and Kalvø one should stay in the middle of the fairway, but out of a navigation channel, as there are many big rocks. The current in the navigation channel is strong. On the coast of Lolland off Kejlsø there are many flint stones on the seashore, so be careful when landing. By strong winds especially from South or North, the ”Bredningen” can be a ”rough sea” with short aggressive waves.

Access to the island of Kalvø is prohibited during the bird breeding season from March 1 to July 15. Seals can occasionally be seen near Kalvø.

The first island after about 3 km is Flatø, which is privately owned. Then Kalvø where you have to keep towards the west to enter at the bottom and continue further up the Flintinge Å. For a really nice scenic experience, you can row up to a sluice just before the road to Nysted. Head back towards Kejlsø. On the coast of Lolland off Kejlsø lies the nature reserve ”Skejten” with old oak trees that have been portrayed by the artist Olaf Rude; the painting is exhibited in the Danish Parliament. Approx. 1 km to Fuglsang Kunstmuseum (art). From Kejlsø you continue to Frejlev Å. Frejlev Forest has many well-preserved burial mounds and orchids. Go ashore at ”the bench”. Or visit ”Knækkerygstenen” on the meadows of Frejlev Enghave. Access is allowed if the Gate is open. Legend has it that a bailiff from Ålholm Castle was killed by having his back broken on this stone by the peasants from Frejlev in 1533. Cross over to the Falster side, where the entrance to Marrebæk channel can be a little hard to find, but here awaits a very special trip where you feel like an Indian on the Amazon! Shortly after entering there is a sluice which has to be passed, and then continue up to the pumping station (about 2 km). After this experience we paddle back to Guldborgsund either straight north to Kejlsø, or you can follow the coast up to Hasselø and further back to the starting point by The Kayak Club.