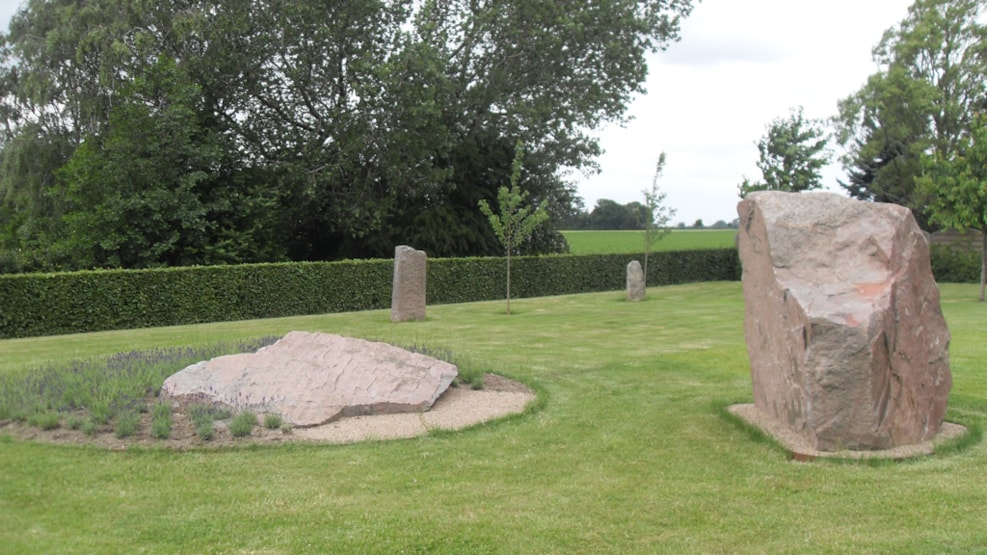 Memorial Garden for Victims of Flood.

As a result of a storm and some very unfortunate changes in the wind direction, the water level in the Baltic Sea rose to extreme heights on November 13, 1872.

The water rushed over the far too low dikes in South Lolland and South Falster.

Compared to some of the natural catastrophes we read about in the papers, it was, of course, nothing that a tidal wave of more than one meter covered South Lolland and changed the old Rudbjerg into an island.

The victims of the flood never had a headstone – they have now.

The stone is a big one – split in two by the frost. On the flat stone the artist Thomas Kadziola has hand-carved the names of the buried victims in the form that they appear in the parish register.

The idea is that you can sit in the memorial garden and ponder the untamable natural forces, the proximity of death – and the gift of life.

The memorial garden faces the very beautiful four-winged vicarage from the 18th century.

In a room to the left of the entrance to the vicarage, a small permanent exhibition has been established which tells the strictly local story of the flood and its consequences in wall pictures, objects and a video film from an amateur play.

For the small parish, the tidal wave was a shattering experience which left its mark on the consciousness. Apart from human lives, the flood killed numerous domestic animals and wrecked several houses, polluted wells etc. And as always, the most vulnerable sections of society paid the highest price.

However, the Flood led to some enormous practical projects of immense importance for the community: to begin with, the building of the big sea dike – and later the drying up of Rødby Fiord.

So actually, a catastrophe led to development and growth based on land reclamation and sugar beet growing