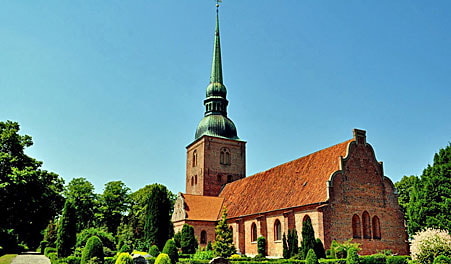 Can be seen from far and wide, because of its 54 metres high tower with a copper-roofed spire. The west part of the nave dates back from 12th century and the east extension and the lowest part of the tower from about 13th century, whereas accretions like sepulchral chapel, porch and tower with spire were built around 1616-21.

The interior of the church is influenced by the attachment to Krenkerup estate from 1529-1973. There are several fine distinguished, heraldic interesting tombstones and sepulchral tables (also in the churchyard). The interior is in modern Gothic style due to a restoration in 1870, where the altarpiece and the pulpit from 1610 were reconstructed. The altar picture represents Christ in Emmaus.