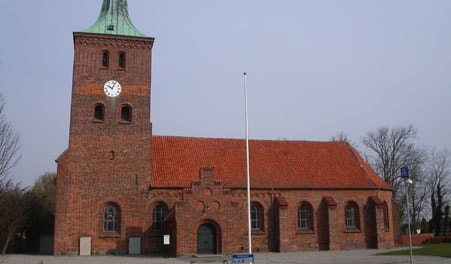 The church was built between the years 1225 and 1300 and is situated on the highest place in town.

Originally it was built as an ordinary romanesque brick church, consisting of nave and choir and a somewhat later added porch.

This porch was renovated in 1850 when the church was repaired. The church got its present looks at a general repair in 1889.

The altar-piece dates back to the late Renaissance 1610-20.

The painting (A.Dorph 1894) depicts Jesus with Martha and Mary.

The Baptismal Font is made in sandstone in 1858.

The church is closed until July 2013, due to renovation.