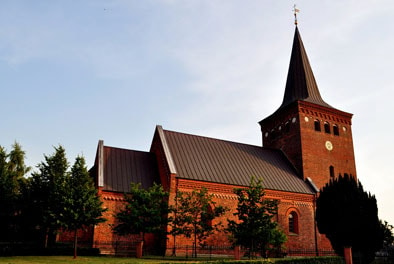 The church is a late Romanesque brick building with a late Gothic tower. It was built around year 1200; in the following centuries, the original church was extended with a nave and tower. The present spire, which is 48 metres high, was built in 1852. The altarpiece, which dates back to the 1500th century, is a late Gothic wood carving from Lübeck. The pulpit from the culmination of the Renaissance with evangelist figures is from about 1620.
Daniel Koehne, Copenhagen, built the church organ in 1866. Allen-organ was inuagurated in 2005.