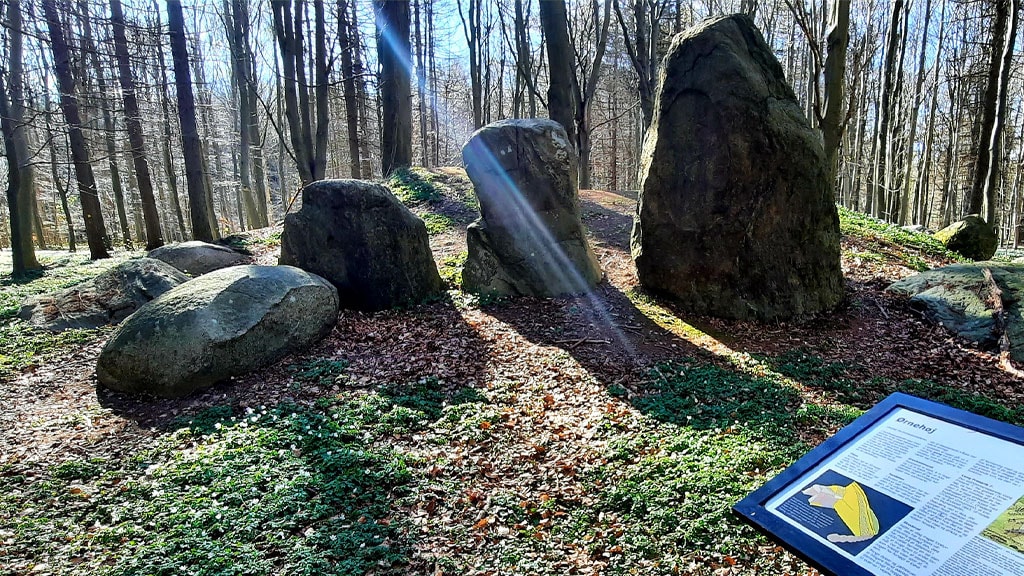 Ørnehøj
Just north of Hesnæs lies Corselitze Østerskov forest, which contains several distinguished ancient monuments. The most impressive of these is undoubtedly Ørnehøj. Walk in along the "Bageste Sti" trail on the northern edge of Hesnæs. Follow the sign to Ørnehøj. After a couple of hundred metres, there is a trail to the right. A short distance down that trail is Ørnehøj.

After a visit by King Frederik the 7th, an oval shield and king’s crown together with the letters F.C.C. and the date 1843 were carved on the largest of the marker stones. The letters refer to the then owner of Corselitze, F.C. Classen.
The huge marker stone stands almost 3 metres tall and leans menacingly towards the East. There are 14 marker stones on the northerly long side and a further 17 stones on the south side. These stones, many of which have toppled over, are between 1.25 and 1.50 metres tall. There are 3 marker stones on the western side. The middle one measuring 2.75 metres has toppled over. On the eastern side, there are 3 erect and 2 toppled marker stones, amongst these the large stone with the monogram.